Investing in your personal biochemistry with Fasting 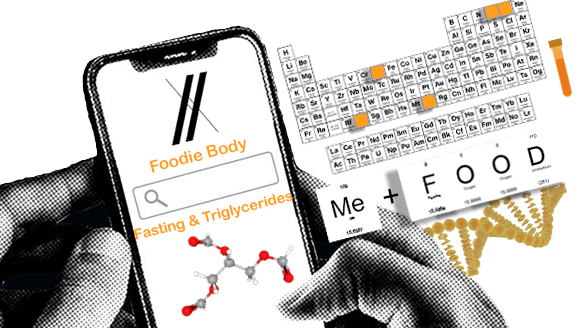 Tips for reducing your triglyercides sustainably

Fasting involves a radical change in cellular physiology and metabolism.  In fact, it is reasonable to consider any type of diet as a form of fasting.  Arguably one of the methods to see positive changes in your body most quickly would be with a distilled water only fast (meaning the only thing one consumes is distilled water).  As explained below in detail, this method allows a body to immediately reduce the root causes of many chronic diseases within 24 hours.  Effective, but less extreme fasting could be a raw vegetable only fast.  These types of fasts are a matter of degree.  Such diets as Keto which is lowering carbohydrate consumption has some effect, but far less than water only or raw vegetable only.  After a distilled water only fast, a re-feeding period with only whole plant based foods (non-refined and mostly raw will keep and improve all progress while providing abundant nutrients).

Blood glucose normally provides the body with sufficient energy through glycolysis. During a fast, maintenance of blood glucose levels initially relies on glycogen stores in the liver and skeletal muscle. Glycogen is made up of chains of polymerized glucose monosaccharides that are used for energy by the process of glycogenolysis. Most glycogen is stored in the liver, which has the greatest role in the maintenance of blood glucose during the first 24 hours of a fast. After fasting for around 24 hours, glycogen stores are depleted causing the body to utilize energy stores from adipose tissue and protein stores.

The drastic change in metabolism that follows glycogen depletion is primarily dependent on the metabolism of triglyceride stores in adipose tissue. Triglycerides are separated into free fatty acids and glycerol that the liver respectively converts into ketone bodies and glucose. Ketone bodies made from free fatty acids through the process of ketogenesis. These ketone bodies travel through the body and are reconverted back into acetyl-CoA at the tissues requiring energy. In addition to adipose catabolism, protein catabolism, through the process of gluconeogenesis, simultaneously takes place in times of fasting.

A notable effect at the beginning periods of fasting is a tension-type headache. This type of headache has an etiology that is dependent on multiple factors and the precise cause has not been identified yet. Proposed mechanisms that might lead to a fasting headache include hypoglycemia, dehydration, along with caffeine withdrawal.  A study has shown that the use of rofecoxib, a COX2 inhibitor, can be effective in reducing and even stopping a fasting headache, suggesting that the etiology may be a product of the pro-inflammatory eicosanoid metabolic pathway.  Fasting should always be performed under the supervision of a physician or ideally in a clinical setting. 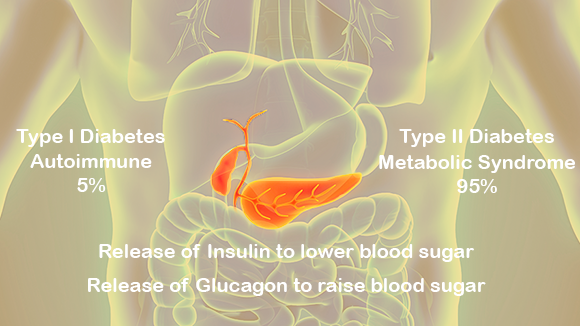 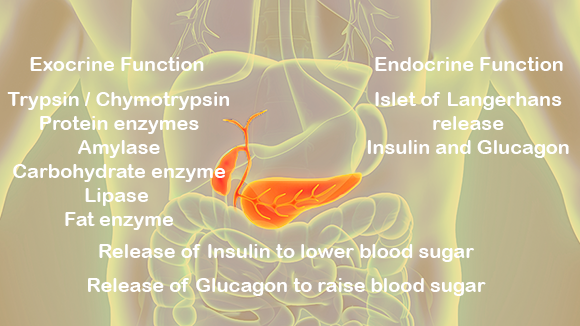 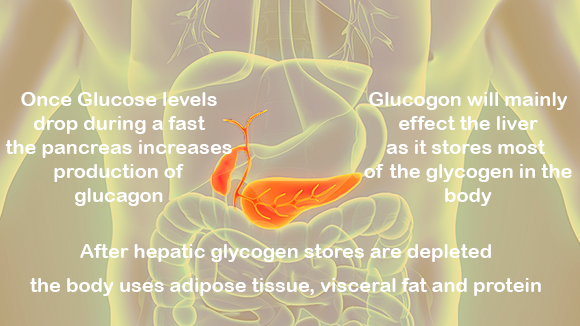 The most immediate organ affected by a fast is the pancreas. During times of low plasma glucose, the pancreas will release more glucagon from the alpha cells found in the islets of Langerhans. Glucagon will mainly affect the liver as it stores most of the glycogen in the body. Skeletal muscle is also affected by glucagon, but to a lesser extent since skeletal muscle contains a low glycogen concentration. After hepatic glycogen stores are depleted, the body uses adipose tissue and protein for energy. The liver has an active role in the metabolism of fats as it is the main oxidizer of triglycerides.

As blood glucose levels fall during fasting, the pancreas secretes increased amounts of glucagon. This action also reduces insulin secretion, which in turn decreases glucose storage in the form of glycogen. Glucagon binds to glucagon receptors at the liver to trigger a cyclic AMP cascade that eventually activates glycogen phosphorylase. Glycogen phosphorylase and debranching enzyme release glucose-1-phosphate (G1P) from glycogen branches at the alpha-1,4 and alpha-1,6 positions, respectively. Then phosphoglucomutase converts G1P to glucose-6-phosphate (G6P). The final step of this process is that G6P is hydrolyzed into glucose and inorganic phosphate by glucose-6-phosphatase.

The breakdown of triglycerides begins with the activation of hormone-sensitive lipase (HSL). This enzyme is stimulated by glucagon, epinephrine, cortisol, and growth hormone all of which have increased plasma levels during fasting.

Each of these hormones activates HSL through a different pathway. Glucagon and epinephrine bind to adenylyl cyclase (on the cell membrane) creating cyclic AMP. Cyclic AMP activates protein kinase A (PKA), which in turn activates HSL. Cortisol binds to glucocorticoid receptor alpha (GR-alpha) located in the cytosol of the cell. Activation of GR-alpha increases transcription of the protein angiopoietin-like 4 (Angptl4). This protein directly stimulates cyclic AMP-dependent PKA signaling which tells HSL to begin lipolysis.

Check out our Foodie Body 30 day plan download (free).  Test your labs independently to verify the results.  You may also search our recipes for free and you may upload your personal blood labs to customize the food search for your personal chemistry.

After HSL is activated, it works with adipose triglyceride lipase to break a fatty acid (FA) from triglyceride reducing it to a diglyceride. HSL and monoacylglycerol lipase break off the other two FA leaving a net total of one glycerol molecule plus three separate FA. Glycerol is converted to glycerol-3-phosphate and then to dihydroxyacetone (DHAP) by glycerol kinase and glycerol-3-phosphate dehydrogenase respectively. DHAP is then metabolized in the glycolysis pathway.

Consult your physician before commencing dietary or drug changes as each person has unique medical needs and risks.

Investing in your personal biochemistry with Fasting